It’s been many months since I last wrote about any knitting or crochet projects. This is not through idleness, however. On the contrary, I have been beavering away on a most enjoyable commission project, thanks to my dear friend Julie.

Last May, Julie was giving me a lift to London’s Gatwick airport and we chatted about her wish to have a crochet cover for her king size bed. No problem, I said gaily, relishing the chance to have a go at a bespoke creation. I don’t think I had fully engaged my brain on the enormity of the challenge. But I have enjoyed so much the whole process – from conception to happy customer.

Initially, having established a few likes and dislikes on Julie’s part, plus palette options, we homed in on a kind of ’tiled’ approach and I set about designing the key components.

Little by little it came together. The design for the large motifs emerged in a fairly straightforward manner, albeit with the inevitable trial and error elements that come with any new project. Getting the joining motifs right, and the borders took longer. But I got there in the end.

The key thing for me was to make sure that each of the large motifs was unique, as well as balancing the tones of the palette to give an overall sense of harmony.

As the year drew on, so the blanket grew. I became very fond of it on my lap in front of the TV! 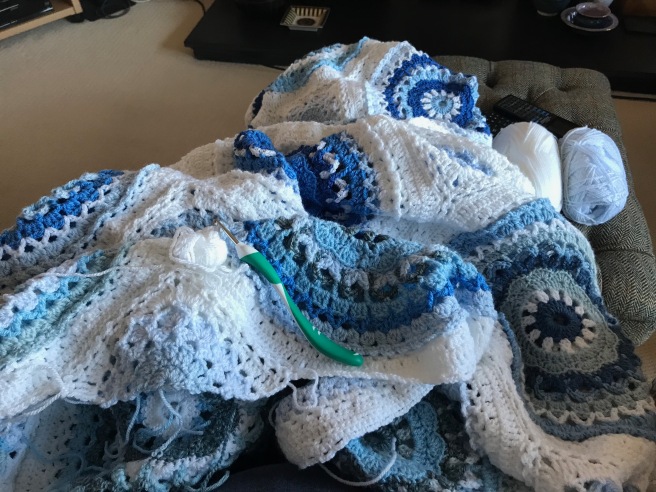 There was a slight hiccup at the end when I found that my approach to the border half-motifs was not quite right. I had to redo all 18 of them, delaying the completion of the blanket somewhat. But it was worth it to get the edges smooth and crisp.

How delighted I was to finish it just before Christmas so that Julie could enjoy it for most of the winter. Even more a relief was that she is really pleased with it. Here we have it in situ on her bed, having been given the seal of approval by the most important housemates:

So that’s what I have been spending my time on behind the scenes. Epic, yet hugely satisfying!

I will be writing up a pattern in due course, modified to make sure that Julie’s version remains unique, while still retaining the essence of the make. But I am first having a break before I get stuck in with all of that. It’s back to knitting for a while…! 🙂

Loving life in Edinburgh, Scotland. View all posts by Liz

What a joy - the arrival of a gorgeous new @littletollerdorset monograph. Can’t wait to spend some quiet screaming time with this, while we look skyward for the arrival of the swifts. And I love the adorable pin too 😍
A neat pile of ends can only mean one thing - a finished #crochet blanket woohoo! Just need to get it in the post to lil’ sis now 😀💕🧶
Nearly time for my annual ‘I love lime green leaves against blue skies’ post. Here’s a preview... 💚💙
Absolutely delighted with this wonderful yarny deliciousness from @qingfibre With a special shout out to Georgia for superb customer service over a wee delivery wrinkle. 👏🏻🌸 Now to get winding and knitting.....! 😍🧶💚