It’s time for the first Six Degrees post of 2019 – hooray! This is a meme hosted by Kate at Books Are My Favourite and Best. Each month a book is chosen as a common starting point and participants then link to six other books to form a chain. It is endlessly amazing to see all the different results and I love taking part.

January’s starting point is The French Lieutenant’s Woman by John Fowles. I read this many years ago and recently borrowed a library copy to have another look at it. Sadly, I could not really warm to it this time. It has a complicated post-modern structure (or should that be structures) which felt rather contrived but perhaps I lacked sufficient stamina to get in to it properly.

Anyway, the first link in my chain hangs on the subject of French military officers. In Fowles’ novel, I think I am right in remembering that the French Lieutenant does not actually make an appearance, but is present by reputation only. In contrast, the French captain of An Officer and a Spy, by Robert Harris, is not only present, but a real person. This novel fictionalises the true story of Alfred Dreyfus,  who was wrongly convicted of spying for the German military and incarcerated on Devil’s Island. It is an incredible tale, brilliantly told. 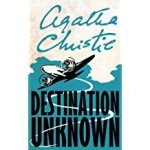 Talk of espionage leads me to Destination Unknown by Agatha Christie.  This novel is one of the few which does not feature any of her trademark detectives. But it is an excellent page-turner nonetheless. I found this book via Ali’s brilliant review and, like her, I highly recommend it. 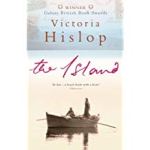 Part of Destination Unknown involved a leper colony, which put me in mind of Victoria Hislop’s The Island. This novel is mainly set on the Greek island of Crete, but also references Spinalonga, which was at one time used as a leper colony. 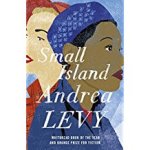 And from here, although it is a slightly obvious leap, I am compelled to link to Small Island by Andrea Levy. I recently watched an incredibly moving documentary about her life and work, filmed as part of the BBC’s Imagine series. We learn about her family’s immigration struggles, and the challenge of coming to a country which you think of as part of home, only to be met with hostility and racism. It is still available on the BBC iPlayer for those of you in the UK and I really hope that it might become available in other parts of the world too. I highly recommend it as one of those must-watch programmes, and of course it is important to read her books too.

Another very compelling book about racism is Chimamanda Ngozi Adichie’s Americanah in which the main character, Ifemelu, travels from Nigeria to America to study. She comes up against different kinds of racism woven through American culture and finds out for the first time what it is like to be classed as ‘black’. As Ifemelu says to her white boyfriend:

“The only reason you say that race was not an issue is because you wish it was not. We all wish it was not. But it’s a lie. I came from a country where race was not an issue; I did not think of myself as black and I only became black when I came to America. When you are black in America and you fall in love with a white person, race doesn’t matter when you’re alone together because it’s just you and your love. But the minute you step outside, race matters.”

This book powerfully deepened my understanding about the impact of racism on those who experience it. It is the perfect example of how we can all benefit from reading as widely as possible about people in situations other than our own.

And in a similar vein, my final leap is to First in the World Somewhere, a memoir by Penny Pepper, who is a writer, poet, punk, and activist. Oh and she also happens to be disabled. I heard about this book via the BBC Podcast A Good Read and am currently reading a library copy. It is another opportunity to go some way to putting oneself in another’s shoes to gain insight and perspective (as well as being the aforesaid good read too). I hope the podcast is available worldwide and apologise to overseas friends if I have managed to highlight yet another programme which cannot be accessed.

In the end, this month’s chain has taken on a rather serious tone. But I hope you will agree that it is no less engaging. I would not have predicted moving from a Victorian gothic-esque novel to the adventures of a pioneering influencer – that’s the joy of these endeavours.

Next month’s starting point is Fight Club by Chuck Palahniuk. In the meantime, if you would like to continue the linking fun, why not check out my accompanying playlist over on my Leaping Tracks blog. 🙂

Loving life in Edinburgh, Scotland. View all posts by Liz

36 thoughts on “Six degrees of separation: From The French Lieutenant’s Woman to First in the World Somewhere”

What a joy - the arrival of a gorgeous new @littletollerdorset monograph. Can’t wait to spend some quiet screaming time with this, while we look skyward for the arrival of the swifts. And I love the adorable pin too 😍
A neat pile of ends can only mean one thing - a finished #crochet blanket woohoo! Just need to get it in the post to lil’ sis now 😀💕🧶
Nearly time for my annual ‘I love lime green leaves against blue skies’ post. Here’s a preview... 💚💙
Absolutely delighted with this wonderful yarny deliciousness from @qingfibre With a special shout out to Georgia for superb customer service over a wee delivery wrinkle. 👏🏻🌸 Now to get winding and knitting.....! 😍🧶💚