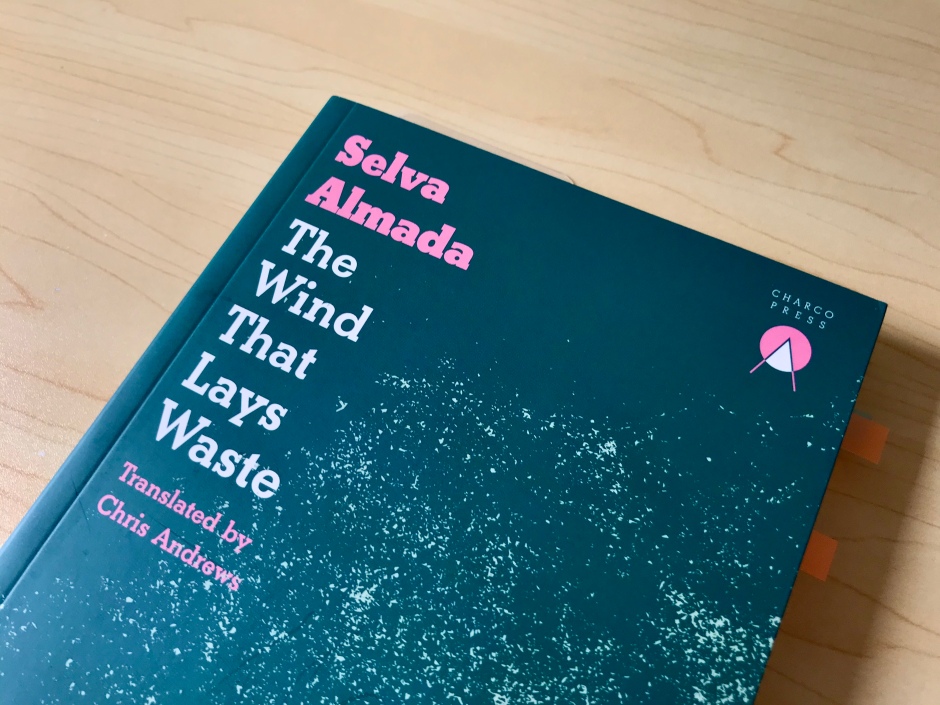 “So, in a curious lurid calm which could not last and yet, it seemed, could not end, the days went by.”
― Iris Murdoch, The Message to the Planet

The Wind That Lays Waste is Selva Almada’s debut novel and the first of her books to appear in English. It is published by Charco Press and translated from the original Argentinian Spanish by Chris Andrews.

The Wind That Lays Waste begins in the great pause before a storm. Reverend Pearson is evangelizing across the Argentinian countryside with Leni, his teenage daughter, when their car breaks down. This act of God – or fate – leads them to the home of an aging mechanic called Gringo Brauer and his young boy named Tapioca.

As a long day passes, curiosity and intrigue transform into an unexpected intimacy between four people: one man who believes deeply in God, morality, and his own righteousness, and another whose life experiences have only entrenched his moral relativism and mild apathy; a quietly earnest and idealistic mechanic’s assistant, and a restless, sceptical preacher’s daughter. As tensions between these characters ebb and flow, beliefs are questioned and allegiances are tested, until finally the growing storm breaks over the plains.

In just 114 pages, Almada explores the present day encounter between these four characters, together with the key elements of their life stories. Her writing is extremely concise, perhaps even terse, all the while conveying incredible depths of emotion, drama and atmosphere. Being so short, it is a book which can easily be read in one sitting. But I found that I kept wanting to take time between the pages to absorb the the narrative and its building tension.

It is a difficult book to review because the brevity of language leaves space for the reader to make up their own mind about what is happening and about the true nature of the characters. I am conscious that any analysis could spoil the experience of a first-time reader. So let me just say that I found it to be a truly multi-layered narrative. You feel as if you are making progress with understanding the characters, each revealing themselves bit by bit. And yet, at the same time, more questions arise which pull you in different directions. On the surface, the story seems pretty straightforward. But the balance between transparency and opacity shifts, like the gathering clouds racing across the sky as we wait for the expected storm.

Despite being a short text, I suspect it is the kind of narrative that reveals more and more of itself with each re-read. I am looking forward to returning to it at some point. I also hope that someone will at some point turn it in to a stage play – it would make for an amazing visual experience, with plenty of claustrophobic drama. Meanwhile, I am very much looking forward to Charco Press’s next Almada publication, Dead Girls, on 3 September 2020.