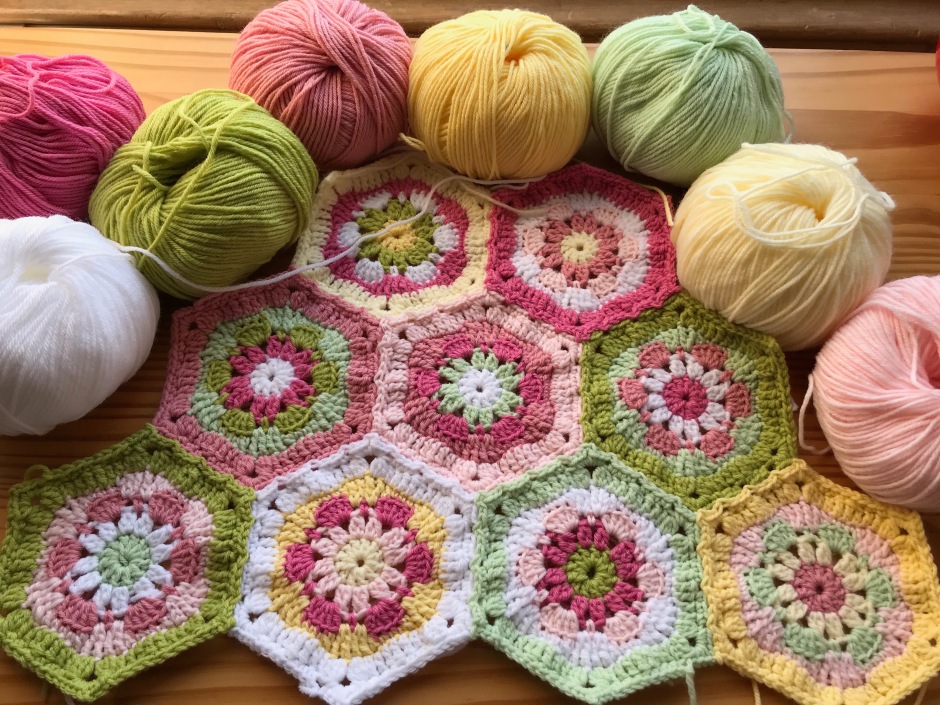 I very much appreciated all the generous comments and likes in response to my last post about my current knitting and crochet projects, so much so that I feel emboldened to share one further bundle of joy.

The weather here in Edinburgh, as for many other places, has continued to be very cold and grey and yes the snow even came back this weekend. How delighted I was, then, to be working with all these beautiful spring colours on the development of a new crochet motif. 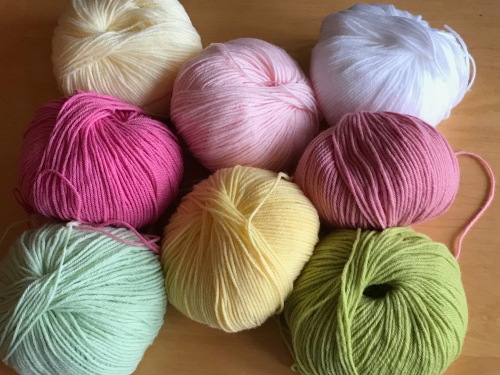 I recently came across this picture on Flickr and knew instantly that the antidote to the current weathery blues would be to create my own version. 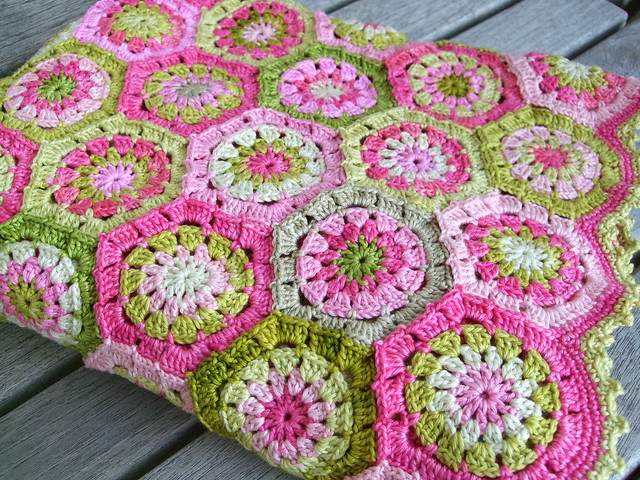 I hunted around a bit for some suitable yarn and happened upon this suggested yarn pack from The HomeMakery. I added to it an additional green, pink and cream from the same yarn range to give me the 8 shades pictured above. All that remained was to decide upon a pattern.

I love the hexagons in the original photo but I wanted my throw to be a bit more blossomy. I also wanted to create a sense of flowers and petals without the design being too lacy. For a throw I wanted a relatively dense fabric for plenty of snuggly warmth.

As you can see from this next picture, I had a lot of fun working up various samples. Sitting with all these lovely colours in front of me while also looking out at the blizzards made my spirits soar! 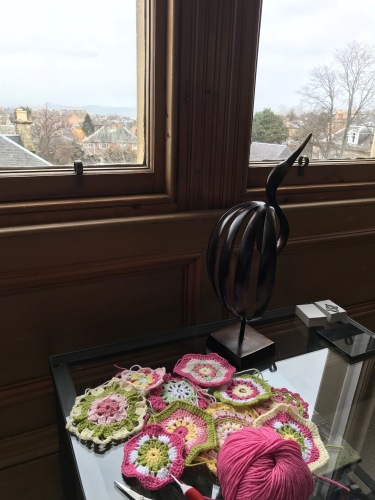 I gradually homed in on a motif which gave me all the elements I was looking for. One interesting conundrum was the extent to which I could avoid make the inner lines too straight. This next photo shows you the, albeit subtle, difference between the straight-edged dark pink row (on the right) and the slightly more wavy dark pink edge on the left. There is not much in it, I accept, but I felt that the softer lines in the motif on the left were preferable. 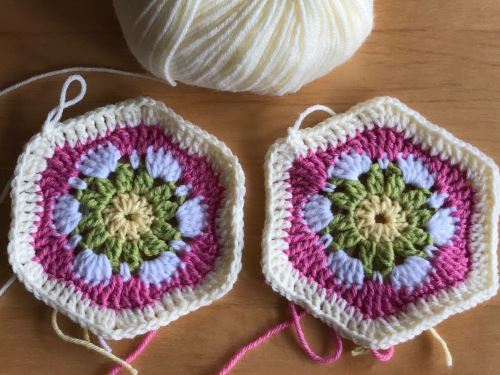 I also wanted to develop a means of joining the motifs as I went along in a way which avoided too much openwork in the motifs’ outer stitch rounds. In these next photos, you can see that I managed to achieve this aim. It also gives you an idea of how the finished throw will look. 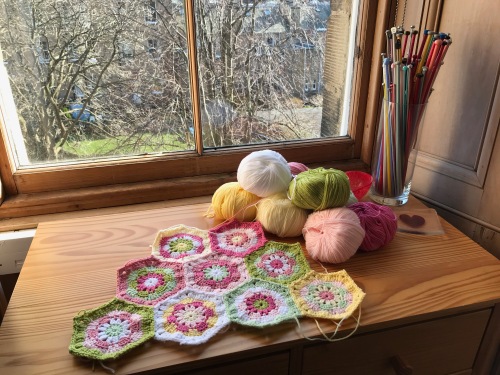 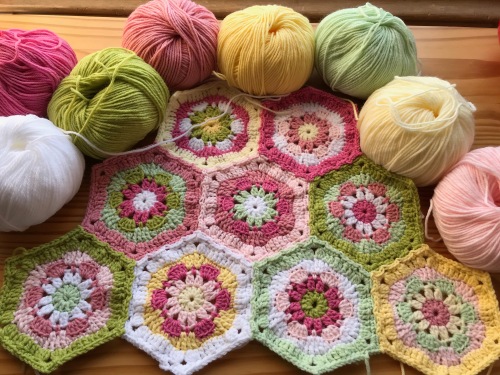 Obviously, there is a still a long way to go. But with these delicious spring colours to work with, it will be no hardship at all.

There are signs of spring outside – I was really pleased to see these daffodils among some residual snow patches while I was out walking earlier today. And I am even more delighted to have plenty of spring blossoms inside too! 🙂 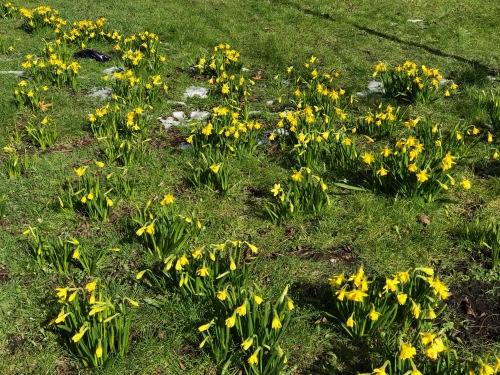 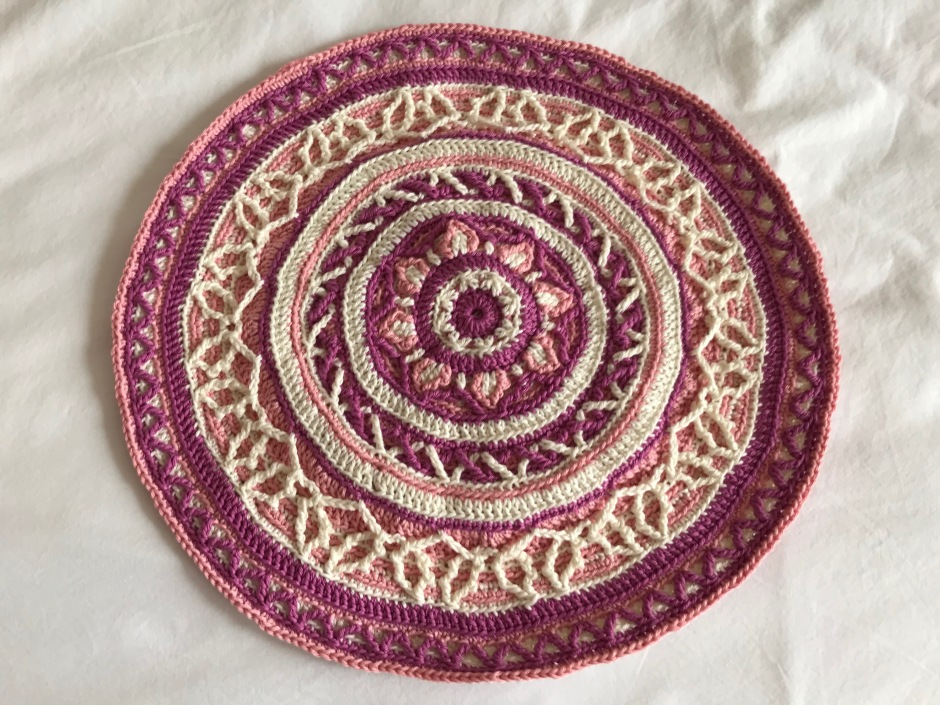 I have been making some good progress with my current knitting and crochet projects since I last wrote about them (here and here), so I thought I would share a few pictures.

I really enjoyed making this mandala. I should have put something in the photo to give it a sense of scale, but it is about 40cm in diameter. It also still needs to be blocked, but I think you can get a good-enough idea of the finished result. It helped me to learn a number of new crochet skills and techniques and used up some of my yarn stash – a win-win! The pattern was very easy to follow and I have lots of plans to make more in due course. 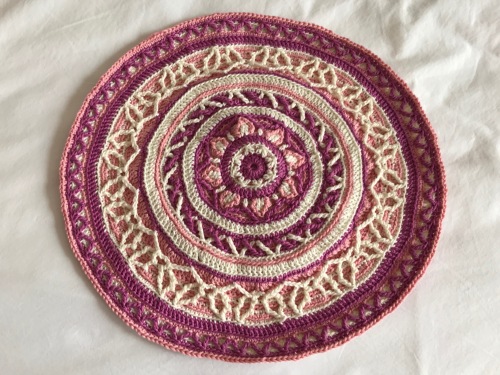 I’ll be using it as the centrepiece of a set of place mats and have started on the first of the individual mats. As you can see, this is not proceeding quite as well….. 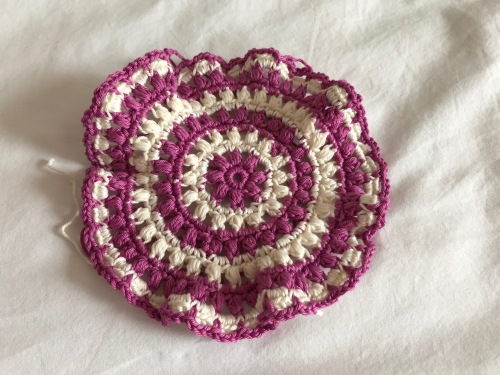 The wavy edge is, I think, caused by too many stitches in the outer rings, compared with the number in the central parts (even though I have definitely followed the pattern). As some point, I will give it another go with a larger crochet hook, although if any of you fellow crocheters have different advice please do let me know.

Meanwhile, I have also been able to progress my Hourglass throw. This is another really engaging pattern to follow, with just the right mixture of challenge and repetition. I very much like the stitch definition which is now starting to come through after a couple of repeats. 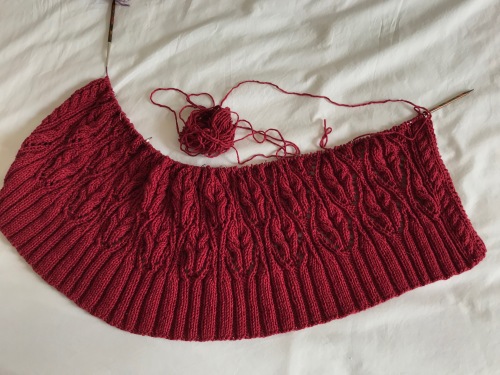 And finally, I could not resist starting my mystical lanterns blanket… 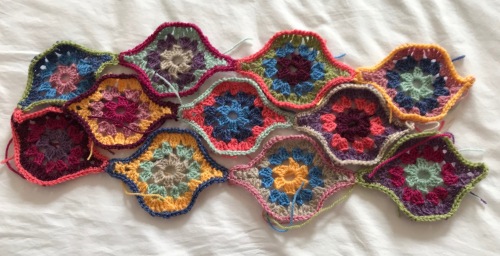 The best aspect of this pattern is the colour selecting process. I had originally thought that I would adopt an approach similar to that used for my Japanese flower shawl. In that case, I worked out a relatively easy way of making sure all ten colours of yarn were used evenly, while also avoiding any duplications of colour combinations across the flowers.

The lanterns present a slightly more difficult challenge, however. This pattern uses 12 colours, with four in each motif, thus increasing exponentially the brainwork to keep track of everything. Perhaps more importantly, though, was the fact that I could feel even with the first couple of test motifs a massive bias on my part towards the shades I preferred. I like the palette as a whole but there are inevitably some colours I like more than others.

All these issues were swept away by the designer’s very clever recommended colour-selecting process. Like all good ideas, it is the very simplest in method, but it works brilliantly. You put all the balls of yarn in one bag and pick out single balls completely randomly for each part of the motif, before placing that yarn in a second bag. You continue to work like this through all the yarn in the first bag and then start again. In this way it makes sure that all colours are used equally. In addition, it generates colour combinations that might well not have been obvious when trying to pick one’s own.

I have, on occasion, discarded my first pick of yarn in favour of a second selection in a misguided attempt to avoid elements of duplication. However, I can see in the photo above, for example, that I have two motifs towards the left-hand side with yellow for the third round. If I had noticed this before completing the second motif, I might well have been tempted to make a change of colour. But I can see from this photo that it really doesn’t matter, not least because the colours take on a different look depending on the varied combinations of shades. It is the overall effect which is the most important, and this will be enhanced by the random colour selections.

It is such a delight to be working on something where you don’t know for sure how it will turn out. Obviously you need to keep faith that it will all be ok in the end but this is a refreshing change from my usual approach with colour-work, where everything has to be meticulously planned from the outset.

So onwards and upwards as they say! 🙂 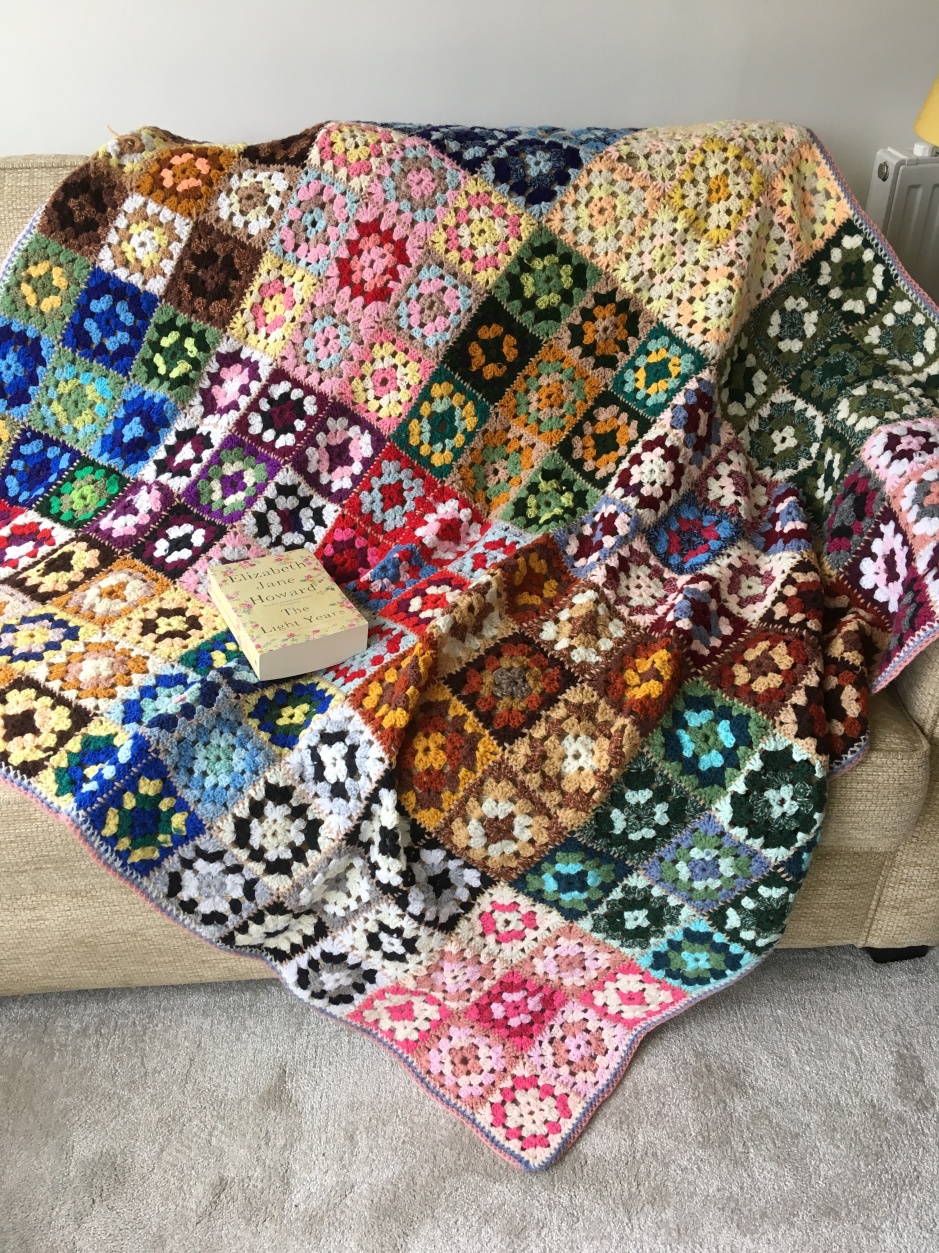 I wrote last week about my recent knitting adventures. I thought I would follow up this week with a reflection on my current crochet endeavours.

I am much less experienced with crochet than I am with knitting. This is not necessarily due to lack of time – I produced this blanket when just a young girl. Neither my Mum (proud owner of said blanket) nor I can quite remember exactly when, but we think I was 10/11ish. Since then, I have done minimal crochet, compared with all my knitting, and it has all been pretty basic. Nothing wrong with that, but I feel the time has now come to expand my crochet horizons. 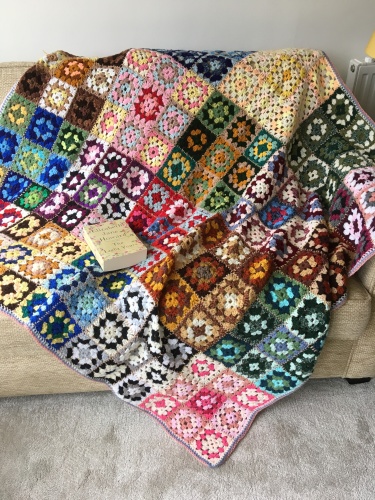 I have been thinking a lot recently about the joy of colour. It is amazing how different something can look simply by virtue of a change in colour scheme. I love the way in which the ‘spirit’ of a crafted piece emerges as you gradually work on it. You can hold various yarns in your hands and imagine what they might look like when woven together. But there are always surprises when you actually get started.

So here is my latest crochet project: 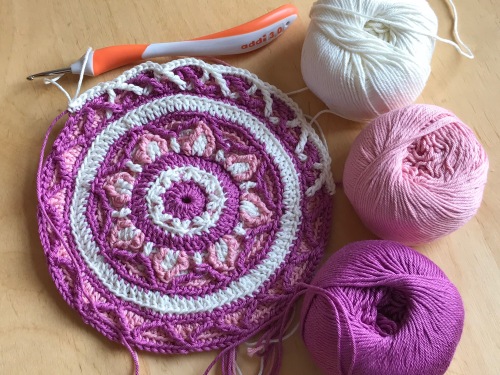 It is ‘Joana’s Mandala’ by Lilla Björn Crochet. Below is the colourway on the pattern – see what I mean about the colour difference? As you can see, I am about half way through. 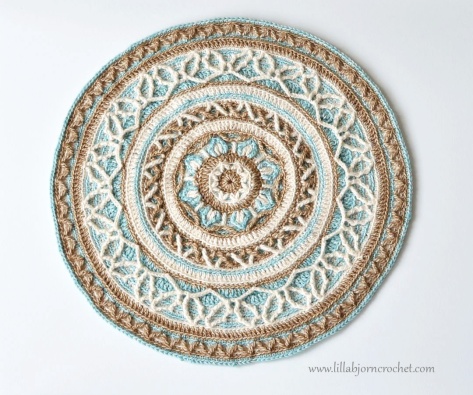 And I could not resist a couple of other yarny treats, which arrived today. I received this gorgeous pack of yarn to make up Janie Crow’s Mystical Lanterns blanket. I adore those colours! 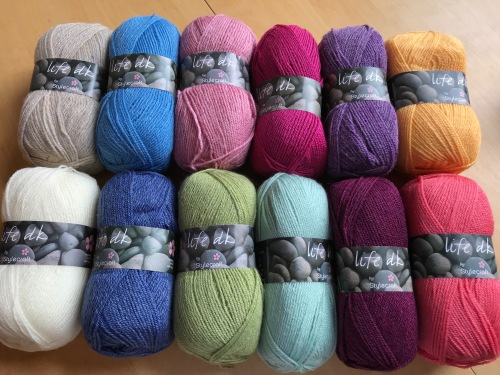 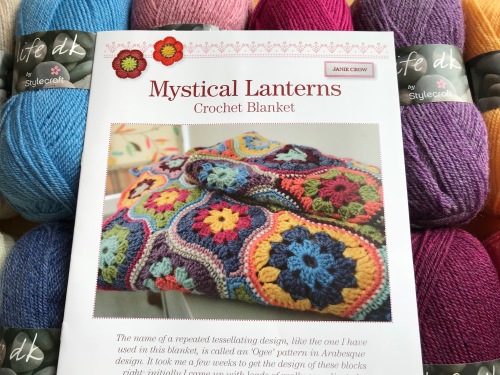 I also threw in to the order these other crochet blanket patterns, which look glorious. 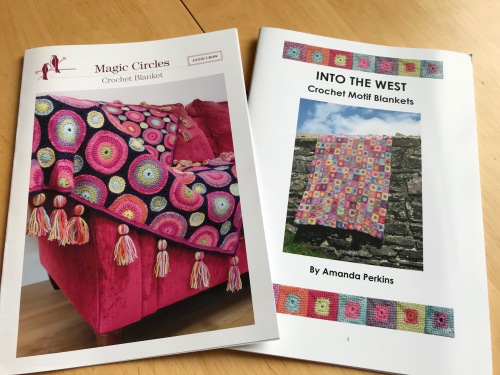 I can’t wait to get stuck in with all of this. But I am being good and making sure I finish that mandala first. Promise….! 😉 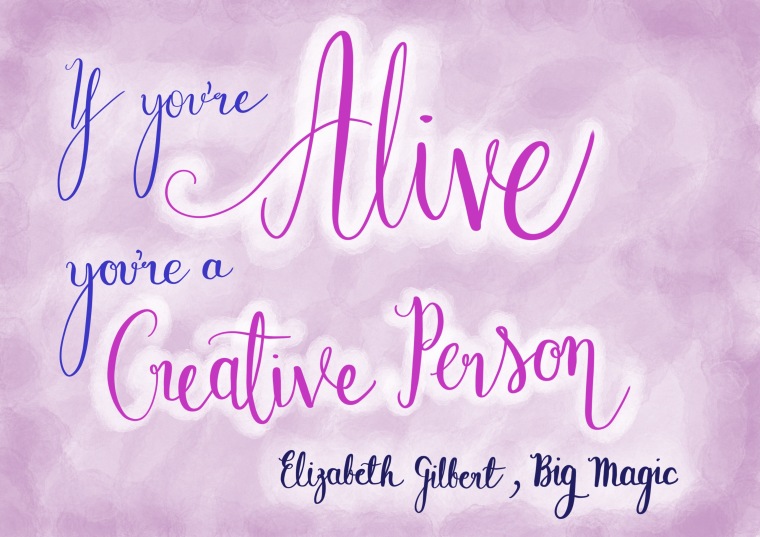 In The Chimp Paradox by Dr Steve Peters, the reader is invited to “imagine that you are 100 years old and on your death bed with one minute left to live. Your great-great-grandchild asks, ‘Before you die, tell me what I should do with my life?’”

The answers you come up with are really advice to yourself.  Peters says “if you are not living by this advice, which is the essence of your existence, you are living a lie. Don’t live a lie; it will unsettle you more than anything else.”

My own results from doing this exercise can be summarised as follows:

“Take notice of who you are and be that person with all your heart.”

END_OF_DOCUMENT_TOKEN_TO_BE_REPLACED

It’s the end of week 2 of our #WarAndPeace2022 Readalong with @clanmother and @arussianaffairig In Vol1, pt1, Chs 8-14 we continue to meet more of the main characters, and Natasha in particular. Here’s my Quote of the Week.
It’s the end of the first week of our #WarAndPeace2022 Readalong and I am excited to post my first Quote of the Week. Chapters 1-7 (Vol1, Pt1) sweep the reader straight into high Russian society, where we start to meet some of the novel’s main characters, who are discussing the pressing topics of the moment: Napoleon’s advance and who should be marrying whom.
A Proustian Still Life before I get stuck in with some evening reading of Swann’s Way for #ayearofproust2022 and a glance through my new gorgeous book of Paintings In Proust, all washed down with some tea and of course a madeleine! #heaven
Re-listening to this beautiful, heart-wrenching book, thanks to @pezzasclassicbooks for the reminder about just how good it is. Only 20mins in and my heart is already a wreck!! Robin Field as the narrator strikes a pitch-perfect melancholy tone. Sadly this version is not available for purchase in the UK, so thank heavens I can keep checking it out with my library app. Thank you #EdinburghLibraries 😀📚